Bob Dylan Isis magazine is now the longest running Bob Dylan publication in the world! With more than 2000 paid copies per issue and still growing. Starting in 1985 the magazine contains a wealth of information on Bob Dylan by a range of authors – much of it not available anywhere else. This Anthology celebrates the 200th edition in the 34th year of continuous publication. Featuring a selection of articles, illustrations and photographs none of which have been available in book form before. This selection has been compiled by the magazine’s founding editor, Derek Barker. The book covers Dylan’s career that includes 36 studio albums, 13 live albums and 14 multi-disc collections in the bootleg series.

Derek Barker is renowned authority on the life and works of Bob Dylan, as well as the owner and editor of Bob Dylan ISIS magazine, the longest- running Dylan publication. Derek regularly contributes to radio and television programmes about Bob Dylan. He is the author of five previous books on Dylan. 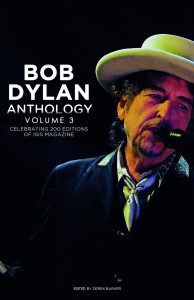