Israel G. “Izzy” Young was the proprietor of the Folklore Center in Greenwich Village from the late 1950s to the early 1970s. The literal center of the New York folk music scene, the Center not only sold records, books, and guitar strings but served as a concert hall, meeting spot, and information kiosk for all folk scene events. Among Young’s first customers was Harry Belafonte; among his regular visitors were Alan Lomax and Pete Seeger. Shortly after his arrival in New York City in 1961, an unknown Bob Dyan banged away at songs on Young’s typewriter. Young would also stage Dylan’s first concert, as well as shows by Joni Mitchell, the Fugs, Emmylou Harris, and Tim Buckley, Doc Watson, Son House, and Mississippi John Hurt.

The Conscience of the Folk Revival: The Writings of Israel “Izzy” Young collects Young’s writing, from his regular column “Frets and Frails” for Sing Out! Magazine (1959-1969) to his commentaries on such contentious issues as copyright and commercialism. Also including his personal recollections of seminal figures, from Bob Dylan and Alan Lomax to Harry Smith and Woody Guthrie, this collection removes the rose tinting of past memoirs by offering Young’s detailed, day-by-day accounts. A key collection of primary sources on the American countercultural scene in New York City, this work will interest not only folk music fans, but students and scholars of American social and cultural history. 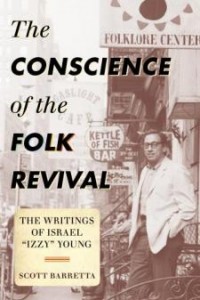