From Booklist’s Ray Olson:
Once he bestrode the American scene like a colossus, but while plenty of his work remains in print, Carl Sandburg (1878-1967) is no longer much–or well–spoken of these days, especially as a poet. This new selection of his verse by two scholars, George and Willene Hendrick, who tracked down dozens of uncollected or unpublished Sandburg poems, may change that situation. It is superb, not a bum poem in it, even if one or another brings one up short with outdated slang or the use of the forbidden n-word (for the record, few white public figures have been ardenter champions of blacks than Sandburg). The Hendricks present 166 poems in sections reflecting Sandburg’s concerns: “Chicago,” “Lincoln,” “African-Americans,” “Love Poems,” “Poems of Protest,” etc. Sandburg’s great inspiration was Whitman; no one else carried more of the tone and panhumanism of Leaves of Grass into the twentieth century than Sandburg. He was less spiritual and more political than Whitman, and his literary roots in urban reporting made for an imagery grittier, grayer, more documentary than Whitman’s–an imagery, though, as striking, especially visually, as any that Sandburg’s imagist peers–Amy Lowell, Pound, Williams–produced. Great stuff. 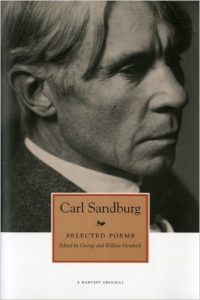