Let me make this clear up front: I’m not a Dylan-head, Dylan-ite, Dylan-phile, Dylan-ologist, or any other kind of extreme Dylan fan. In fact, I never bought a Dylan record or CD until just a few years ago. I never saw the need. Growing up in the 60’s, Dylan was on the radio all the time –“Blowing in the Wind,” “Don’t Think Twice It’s All Right,” “The Times They Are a Changin’,” “All I Really Want to Do,” “It Ain’t Me Babe, “Mr. Tambourine Man,” etc., etc. Plus, many other bands had hits with his songs, like Peter Paul and Mary, Hendrix, and The Byrds. There was no escaping Dylan back then. You listened to him whether you wanted to or not.

In college, it seemed like everybody in the dorm except me owned Dylan’s Greatest Hits, Volumes 1 and 2. So I had to listen to the same songs all over again at just about every dorm party. One kid down the hall even had a guitar, a neck stand with a harmonica, and a music book of Dylan’s greatest hits. So I got to hear the same songs played and sung live — quite amateurishly, to put it kindly. By the mid-70’s I’d had quite enough of Dylan — so much so that I did a nasally, slurred vocal rendition of “Like a Rolling Stone” just to torture the Zimmermanites, even though they never seemed to mind. In fact, they joined in no matter how obnoxiously I wheezed, “How does it feeeeeeeel?”, so the joke was always on me.

What I wanted to hear was something different, something that wasn’t on the radio. Soon punk and new wave surfaced, and I’ve been a slave to indie rock and the underground sounds ever since, as my record collection can attest. My opinion of Dylan stayed the same during all that time, even though I didn’t sing “Like a Rolling Stone” quite so often (although I did work up an even more annoying version of “The Needle and the Damage Done” but that’s another story).

Then about five years ago I met this kid at work. About 25 years my junior and with 80 gigs of remastered 60’s classics by The Who, Beatles, Kinks, Stones, Hendrix, and Dylan on his iPod. We worked together and made quite a pair: a young kid who listened to nothing but 60’s rock heroes and a middle-aged guy still looking for the latest underground thing. It didn’t compute. We had arguments about Roget Daltrey, who I cannot abide, and The Replacements, who the kid just refused to enjoy. It was The Odd Couple Revisited.

I grudgingly agreed to listen to his 60s music, and behold — I became enraptured with Dylan, especially early Dylan. I pored through documentaries and books. I studied the deep LP cuts. I endured I’m Not There, and I tried my best to understand The Basement Tapes. Eventually even Dylan’s harmonica playing no longer made me cover my ears and hide. Part of Dylan’s appeal for me is the history and the myth, of course: Al Kooper, The Hawks, ‘Judas!’, Baez, Newport, Suze, Ginsburg, the whole crazy scene. I mean, aside from Brian Wilson who else from the 60s can claim to have influenced the Beatles? In fact, the Beatles were still singing about holding hands when Freewheelin’ came out.

So when I heard that Dylan was appearing at the Mann, I figured it was my last chance to see him. I mean, the dude is 70, and it’s a miracle he’s still alive and touring. Plus, I wanted that one memory of Dylan, something to remember whenever I listened to another Dylan song. Wednesday night did not start off well. A traffic jam and parking confusion meant that we got to our seats just as the Leon Russell’s set was ending. But it did give me an opportunity to gaze in wonder at Russell’s astonishing appearance — a glowing white pyramid of hair, like some cross between Gandalf and ZZ Top. However, the covers of rock standards with which he ended his set, like “Roll Over Beethoven,” were eminently forgettable.

Soon I was in a food line and got into a conversation with a veteran of many Dylan concerts. I mentioned this was my first Dylan show. “It won’t sound like the Bob Dylan of the 60s or 70s,” he warned. “The performance is totally unsentimental. They play sixteen songs. The last two will be hits, like ‘Mr. Tambourine Man’ or something like that, just to make everybody happy. Then they walk off stage. That’s it. The arrangements for his classic songs are completely different than his records, so it may take a minute or two to recognize them. Don’t be disappointed. So just sit back and enjoy a great rock band.”

Read the rest of the article at Phawker 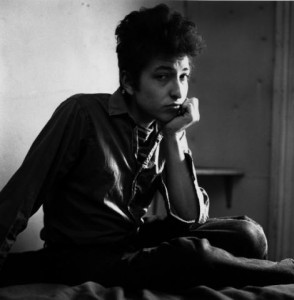