Always for Pleasure is a 1978 documentary film by Les Blank about social traditions in New Orleans, Louisiana.

The film subtitles a Creole song as “Hey Legba” when the tune’s title phrase is actually “Eh la bas”, a formerly common Louisiana Creole phrase of greeting roughly translating as “Hey over there you”. However, in New Orleans, Legba was often referred to as “Papa La Bas”, and some scholars, such as Henry Louis Gates, believe that “Eh La Bas” was a covert reference to Legba.

Unusually, the film includes looks at traditional predominantly white second lining organizations; many other films and documentarians have falsely assumed such traditions to exist only in predominantly black groups. 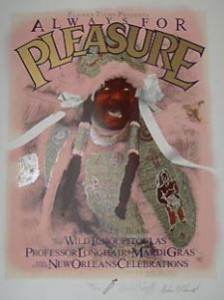