Woody Guthrie: Radical American Patriot is a collection of material recorded “in service” of the U.S. Government. Here are his complete Library of Congress interviews and musical performances recorded by Alan Lomax (released in their entirety for the first time); his songs written while employed by the Bonneville Power Administration, including a previously unreleased, minor key version of “Pastures of Plenty”; a set of previously unheard home demonstration recordings of songs made for a late 1940s public health service VD education program; three radio skits, including two for the Office of War Information during the Second World War; and a number of other radio performances made in support of the war effort. It’s a sweeping overview both of a transitional period in American history, and of the prolific, multi-faceted life of Woody Guthrie. 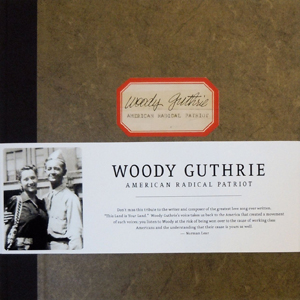