When I Paint My Masterpiece
by Marisha Pessl
New York Times, June 1, 2008

These days the word “artist” is pretty tired. It’s one-size-fits-all like no other word in the English language, maybe apart from “god” and pronouns. It describes Isadora Duncan, Spike Lee, Picasso and Q-Tip, all in a day’s work. And just when it thinks it can take a breather, it has to account for that kid living on the Bowery praying his orgy Polaroids make it into the Whitney and that writer in Starbucks taking trippy liberties with linear structure in a screenplay called “Mama.” Even the man on 42nd Street who believes the world could always use a few more faces of Leonardo DiCaprio in “Titanic” spray-painted onto felt, even he has a claim on the word.

“Artist” can’t make even the briefest public appearance without extensive baggage. The next time you’re at a party and someone asks what you do for a living, boldly say artist, then sit back and watch the jolting effect that little word has upon a conversation. Above 14th Street, you’ll be offered money, food, some tips on where to find free lodging. Below 14th Street, the person will smirk, dutifully ask “What kind?” or appear to start swallowing an egg, which is a disguised yawn. You’ll get a hug in the Midwest. In Santa Monica, you’ll get “sweet” and an invitation to go Rollerblading. In certain parts of the country you’ll get tied up and thrown into the back of a pickup truck, and no one will ever hear from you again.

But every now and then, the word perfectly explains a certain person. In Bob Dylan’s extraordinary collection of paintings, “Bob Dylan: The Drawn Blank Series,” we are given insight into the expressive, unvarnished way this artist approaches the world and reminded he is that rare person who can move effortlessly between music, word, ink, paint, as if he’s just futzing around with a few different instruments in the studio. Yet again and again, he reflects life back to us with a truth and simplicity that defy words. He shows us views from his hotel and backstage dressing room, a playground slide that caught his eye, a fat curtain in his room, an inquisitive young man named Nick Leblanc. He riffs with color across the same simple black-and-white sketches the way he plays songs in concert, sometimes making subtle changes, other times brutally overhauling them. His brush strokes are like his voice: straightforward, rough, occasionally fragile, but always intent on illustrating the treads of human experience. Seemingly unworried about how something looks, he’s not after artistic perfection but something larger, a moment, a feeling. The effect is enthralling.

Dylan drew the moody black-and-white sketches while on tour between the years 1989 and 1992, and in 2007 turned some of these drawings into more than 200 paintings (170 reproduced here) by adding vibrant watercolors and gouaches, as well as titles like “Feet” and “Cupid Doll.” The naturalistic scenes record the world around him, observed between performances, and illustrate how his eye relentlessly pursues usually ignored people, buildings and common objects. He wrenches objects from the background — an outdated TV, Venetian blinds, empty doorways and alleys — and puts them center stage, unearthing a beauty in the bland.

In the crowded “Rooftop Bar,” no one but the artist notices the solitary woman staring off the balcony, her back to us, face unknown. And the lady waiting at the bar in “Woman in Red Lion Pub” would never have dreamt her broad back would become the electric-red subject of a painting. But in her slanting, voluptuous silhouette, her choice of dress and hat, Dylan points out her power and sturdy elegance, qualities she herself seems unaware of. “Motel Pool” features the kind of sad swimming hole that without hyper children wearing Floaties and screaming “Marco! Polo!” goes instantly stale. In one version it’s a viciously sunny day, achy on the eyes, a saggy palm garnishing the patio like speared fruit hanging off the rim of a Mai Tai. Rendered in the plum colors of night, however, that same scene goes lush and secretive. You really wouldn’t be surprised if, after brushing your teeth, you glanced outside and saw thieves by that pool conspiring to rob the main office, or maybe drunken lovers lurching past it, trying not to fall in.

And that is the best part of “The Drawn Blank Series.” There are the overt joys of Dylan’s framing; he hacks off heads, shoulders and legs to home in on an expressive mouth, belly and three-fourths of an armchair. There’s also his wonderfully gleeful perspective. His cities are built not on rock but on waterbed. Porches undulate toward us. Roads swell. Telephone poles, cars and guardrails all stretch toward Dylan like fans hopeful for a glimpse of him without his sunglasses. And his portraits are what passport photos should be: neat square headshots in strong colors and a few strokes revealing the person fundamentally. No, the true joys of Dylan’s art derive from his bird’s-eye view of our world, his understanding that a splash of purple will turn an ugly pool romantic. In the series “Rose on a Hillside,” he keeps the rose but restlessly changes the background — a European town, a country cottage, a cluster of skyscrapers — underscoring an interconnectedness that most of us, without the help of an artist, will never fully recognize.

Marisha Pessl, the author of “Special Topics in Calamity Physics,” is working on a second novel, “Night Film.” 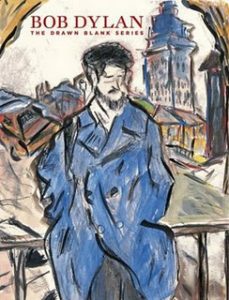