Rendered in striking, explosive graphic form, many of Bob Dylan’s most famous songs—illustrated as they’ve never been before.

For the last forty years Bob Dylan has never ceased to be one of the most creative and inspired musicians in the world. Mesmerized by the power of his lyrics and intrigued by the possibilities of translating his powerful, enigmatic personality into art, thirteen leading graphic artists banded together to create this unusual testament to the universality and transcendent vision of an American musical genius. With their vibrant, unexpected colors and dynamic, cinematic imagery, this group has assembled in Bob Dylan Revisited one of the most provocative interpretations of Dylan’s music in decades. These artists capture the tender emotions, the ineffable sadness, and the romantic overtones of Dylan’s classic songs, at the same time reflecting the moral and political urgency of his music. Each artist’s style surprisingly complements Dylan’s lyrics and offers an irresistible window through which to reconsider one of America’s most enigmatic artists. A deeply respectful and brilliant homage to the extraordinary influence of Bob Dylan.

“Sixteen cartoonists, mostly European, interpret 13 of Bob Dylan’s most familiar lyrics in this lavishly illustrated oversized book. Dylan’s songs don’t generally call out for visual accompaniment—they map out emotional states or tell stories, but provide all the images they require. There’s plenty of stylishness and a wide range of illustrative technique; unfortunately, few of the contributors have anything in particular to say about or add to Dylan’s words. Some artists settle for redundant representations of the lyrics, including Bramanti’s western death scene for Knockin’ on Heaven’s Door and Gradimir Smudja’s semiphotorealist Hurricane. Even Dave McKean, rendering Desolation Row with his usual multimedia technique and surreal distortion of space, can’t help packing his story with literal renderings of individual lines. Other artists simply throw their hands up: Bézian accompanies Tombstone Blues ‘ hilarious torrent of language with apropos-of-nothing drawings of girders, railroad tracks and a crowd of people, and Jean-Claude Götting’s Lay, Lady, Lay is a brief erotic scenario that just happens to involve a big brass bed. The most rewarding piece is actually a commentary on Dylan himself: Zep’s interpretation of Not Dark Yet shows four sly caricatures of the songwriter in the various phases of his career. ” — Publishers Weekly 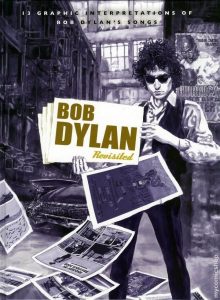