“A historical compilation to savor” (Los Angeles Times) that is “invaluable…irresistible” (The New York Times)—the ultimate collection of interviews and encounters with Nobel Laureate Bob Dylan, spanning his entire career from 1962 to today.

Bob Dylan: The Essential Interviews features over two dozen of the most significant and revealing conversations with the singer, gathered in one definitive collection that spans his career from street poet to Nobel Laureate. First published in 2006, this acclaimed collection brought together the best interviews and encounters with Bob Dylan to create a multi-faceted, cultural, and journalistic portrait of the artist and his legacy. This edition includes three additional pieces from Rolling Stone that update the volume to the present day.

Among the highlights are the seminal Rolling Stone interviews—anthologized here for the first time—by Jann Wenner, Jonathan Cott, Kurt Loder, Mikal Gilmore, Douglas Brinkley, and Jonathan Lethem—as well as Nat Hentoff’s legendary 1966 Playboy interview. Surprises include Studs Terkel’s radio interview in 1963 on WFMT in Chicago, the interview Dylan gave to screenwriter Jay Cocks when he was a student at Kenyon College in 1964, a 1965 interview with director Nora Ephron, and an interview Sam Shepard turned into a one-act play for Esquire in 1987. 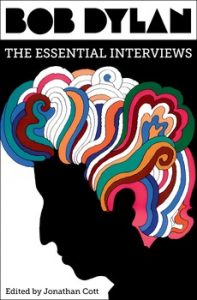