In 1965, photographer Jerry Schatzberg, already well-established in the field due to his fashion and portrait photography for various publications, such as Vogue, Esquire and Life, listened to Bob Dylan for the first time. He had been hearing about the singer for close to three years; two friends were especially dogged and would ask him every time they spoke if he had heard the music yet. Finally, feeling obligated to them for their persistency, he listened and understood immediately why Dylan was inspiring such passionate excitement. Shortly thereafter, Schatzberg was photographing a job in his studio and had some fortuitous company. Famed music journalist Al Aronowitz and disc jockey Scott Ross were discussing Dylan and a recent performance they had seen of his. Half listening to their conversation, he volunteered that he’d like to photograph the singer if given the chance. Dylan’s new wife (one of the friends mentioned above) called the following day and gave him an open invitation to the studio where he was currently recording ‘Highway 61 Revisited’. Excited and curious, Schatzberg set off the very next day for the studio, exactly six days after the seminal Newport Folk Festival set where Dylan went electric and was collectively booed. Schatzberg received a warm welcome from the singer, who immediately sat him down to listen to what he had been recording that day. Dylan gave him free rein of the studio once he started shooting and the images that emerged from that day make obvious the comfortable and relaxed atmosphere that was already brewing between photographer and subject. Considering Dylan’s almost-universal dislike of journalists (and by extension photographers), this was a completely unprecedented situation, one that Schatzberg took seriously.

That almost-instant trust and rapport quickly grew into a friendship and they are part of the reason Schatzberg’s sittings with Dylan work so successfully and are so important. Dylan is relaxed, he’s funny, he takes the props that the photographer gives him and has fun with them – he’s obviously not taking himself too seriously. Working and socializing together, Schatzberg would eventually do nine more photo shoots with Dylan from 1965-6, arguably the singer’s most creative period, and capture the (now) Nobel laureate during one of the most pivotal moments in music history. Part of their uniqueness is their basic broad range of intimate and public locations: music and photography studios, live performances and street portraits. But more than that, each session (including the one for possibly his greatest album, ‘Blonde on Blonde’) says something different about Dylan, the man and the musician, and manages to perfectly capture the many facets of one of the most unique, complex and mysterious individuals of all time. 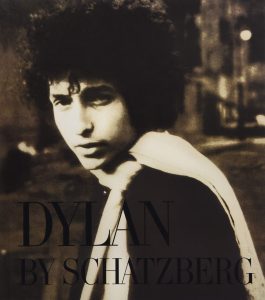