Current exhibit: “The Brazil Series” at the National Gallery of Denmark

From the AP:
Bob Dylan’s ‘Brazil Series’ on display in Denmark

Doug Heselgrave’s review in No Depression

To the Editor (of Berlingske Tidende),

I hear that some Danish critics have been harsh about Bob Dylan’s paintings on view at the Statens Museum. Well, Dylan is all too used to criticism: for his entire career, he has been criticized for many things that, with the benefit of hindsight, have turned out to be among his greatest accomplishments. So critics need to remember that they who do the judging will eventually themselves be judged.

It isn’t hard to understand why some people have difficulty with Dylan’s paintings. There was same reaction when Picasso wrote poems; instead of acknowledging that they were amazing creations, critics said he should stick to visual art. Having spent my whole career looking at modern paintings, I happen to think that Dylan’s are products of an extraordinary, inventive imagination. As I wrote in the catalogue for the exhibition, it is the same mind and eye that made the songs, but now turned in an astonishing new direction. It is, therefore, an occasion for celebration that the Statens Museum is not afraid of the unexpected, as some of the critics seem to be.

I have read that “the art history professor Peter Brix Soendergaard” said condescendingly to the daily Information, “Bob Dylan paints like any other amateur, using a rather oafish figurative style.” This makes me wonder whether he took more than a fleeting glance at the exhibition. A great critic, Clement Greenberg, once wrote, “Anything in art that is surprising enough to be puzzling usually causes discomfort. It depends on the critic’s sincerity whether he will suspend judgment and endure the discomfort until he is no longer puzzled.” Or, as Dylan himself famously advised writers and critics: “And don’t speak too soon/ For the wheel’s still in spin.”

Remember how that stanza ended? “For the loser now will be later to win/ For the times they are a-changin’.” 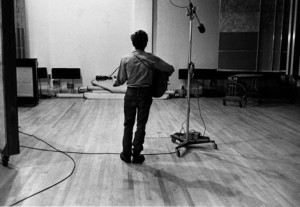 The Witmark Demos and The Original Mono Recordings Now Available!