Larry “Ratso” Sloman has solicited some comments about Bob Dylan for AARP magazine. Here are a few, with more to come:

There was a time when Bob Dylan was the young kid on the block. We all sang at the Purple Onion and the Hungry I and at folk-music clubs. When Bob came along, everyone loved him because he was what we all had meant to be; he spoke for all of us. And he was known to be honest, which is what a great American artist is. It may not be expedient, but the audience can trust the artist who is honest, and Bob Dylan followed what he said in his lyrics by his actions. He supported the human being, the spirit of being an American — of knowing that the mountains and the rivulets and the voting booths belong to all of us, all the time.

JIMMY BUFFETT
From the man who never grew up: I would simply like to say that Bob Dylan’s music has kept me forever young.

SENATOR BILL BRADLEY
I’ve been a fan of Bob’s since the mid-’60s. His lyrics had an appealing complexity to them that spoke on many levels and allowed one’s imagination to flow, in addition to the music and his distinctive voice. I was very pleased when Princeton gave him a Ph.D.; I even wrote the president when they nominated him that it was the greatest thing the university has ever done. I’ve followed Bob through his various permutations and I think his latest stuff is some of the best stuff he’s ever done. It’s his personal reflections on age and relationships and it’s quite different than earlier, because he’s lived a life, had a near-death experience and he’s seen it all. I love that line where he says he’s going down to see Alicia Keys, let me show you what I got.

His voice is pretty much gone, but that’s who he is. I don’t think he’s ever really tried to be somebody else; that’s the key. You see a lot of these musicians, they want to be actors or they want to do this or that, and then ultimately they’ll come back to being who they really are. I think Bob’s always been who he is. He’s still out there doing it and that means that his public, in this case me, will never be deprived of hearing where he’s coming from at a particular time in their lives.

HARRY BELAFONTE
Bob Dylan has lifted the spirits of millions of people in the world. He has inspired great numbers of artists, and has made those of us who have met him come to be rewarded by the encounter. I admire him, I respect him, I am honored to have this moment to express my deep appreciation for who and what he is.

BRUCE DERN
About five years ago, the director Larry Charles called me up and asked me if I would be interested in being in this movie Masked and Anonymous that was starring Bob, and he was getting a bunch of people together that Bob admired to do vignettes in the movie. And I said, “Sure, I’d be honored.” So I went to work and I met Bob, and immediately was struck by a few things. First, his size. I thought, somehow, he was bigger. The cowboy hat and the cigar added to his height and stature, however, and that I liked. Second, I was extremely taken by the lack of ego in his demeanor. His feeling that there’s no “I” in the word team, his knowing that his movie was teamwork, and that he had to rely on those of us who he felt were really good actors, more than he relied on his own talent.

Bob is about having your heart and everything else in the right place and going for it irregardless, and that irregardlessness and throwing caution to the wind is what excited me about the man and his music and his spirit. If you want to talk about what makes stars, stars to me are people that dominate decades. I can’t think of any one individual, other than Bob, who has dominated multiple decades. What can I tell you, man, he’s unique.

JONATHAN LETHEM
If, as the poet says, “The purpose of art is to stop time,” then Dylan has stopped more time, at least for me, than anyone living or gone. Dylan is a man out of time, belongs to the ages, ages well, is no age at all. So what if 70 years have now accrued to the animal body our bard, our Blake, happens to cart around? He was older than that before, and he’s younger than that now.

And, most fortunately, his relationship to “retirement” seems to be weird too. Take a day off, Mr. Dylan, and blow out as many candles as you like. But just a day, okay?

LUCINDA WILLIAMS
The first Bob Dylan album I heard was Highway 61 Revisited. It was 1965. I was almost 13 and had just started guitar lessons. We were living in Baton Rouge, Louisiana, and my dad was teaching at LSU. One of his writing students came over to the house one day with this album. He was raving about it. My dad wasn’t particularly interested but I was. His student left it at the house and I listened to it. Even though I was barely 13, I got it.

From the time I was a small child, I had been influenced by southern poets and folk, blues, jazz and country music. Here was a guy who was putting it all together, for the first time. At the time, I didn’t get all of the in-depth meaning of the songs but that didn’t matter. I decided, right then and there, that I would learn how to do what he was doing. I wanted to be as good as he was and I have been learning how to do it, ever since.

MILTON GLASER
I met Dylan originally because I was a good friend of Albert Grossman, who was his manager and his mentor. Columbia, Dylan’s record company, put out a greatest hits album. I did the poster for it. They had gotten control over the editing and they put that album together using material that perhaps Dylan might not have used. Dylan hated everything about that album. But the poster proliferated.

You do things and you have no idea of why they enter the public consciousness and this is one of those things because it represents an entire generation’s interests and it’s Dylan, who is a compelling figure.

I never did hear his reaction to it. I always assumed he just wanted to forget about it.

KINKY FRIEDMAN
Bob’s a rock star, a world icon, a songwriter and performer who has influenced and inspired millions and affected our music and our world in a profound way. But at heart, I believe, if someone asked him how he thinks of himself, he would say he’s only a minstrel boy. I say, long may he wander in the raw poetry of time! Happy Birthday, Bob. 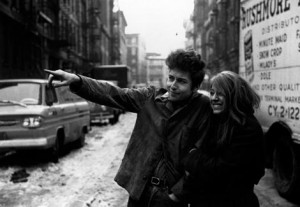 A New Take on TARANTULA